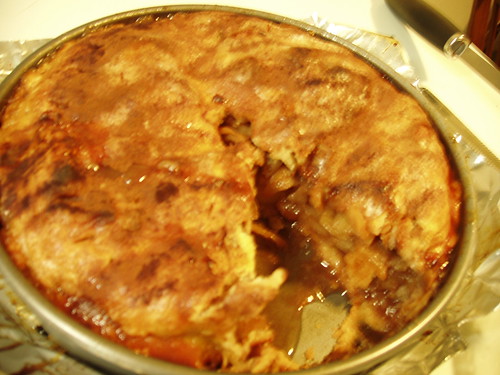 Despite the massive amount of school drama going on, I'm still having some fun. Making apple and quince pie with Jello shots on the side with my roommate in our little kitchen was really awesome, especially since I was able to get a bit buzzed on a Monday night. (Sorry if I rambled on and on cheerfully to you after drinking - vodka makes me giddy and garrulous, a potent and terrible combination.)

I've never had quince. It supposedly has a distinctive taste, texture, and smell. Honestly, it looked, tasted, felt, and smelled like a very stiff-fleshed apple with a hint of pear. That's not to say it's bad, just that the quince we had probably weren't prime examples of the fruit. In any case the pie tasted as delicious as it looks. It's loaded with fruit, cinnamon, sugar, and butter - really, what could be better? We didn't really use a recipe, but this is what we came up with. I must say it turned out perfectly.


1. Combine butter, flour, and salt until well combined. Add water as needed to make a firm dough. Roll into a ball and refrigerate for 30 minutes.
2. While dough is resting, core and peel apples and quince. Cut fruit into very thin slices and place in a large mixing bowl. The quince we had were fairly tough, so be careful while coring and slicing these.
3. Add sugar and cinnamon to fruit. Mix well, and let rest until macerated (fruit releases juices).
4. Divide dough into two uneven pieces. Roll out the larger piece for the base of the crust and lay over pie tin, pressing down; dough should cover the entire bottom and sides of the pan. Trim excess.
5. Fill tin with fruit ONLY. Leave the liquid at the bottom of the mixing bowl. It's okay if the fruit is in a huge pile - it'll cook down.
6. Stir filling flour into the fruit juice. Mix very well, making sure there are no lumps at all left. Big raw flour lumps are not tasty.
7. Pour juice over fruit filling.
8. Roll out the smaller piece of dough for the top and place over filling. Press two dough sections together. Cut small slits around the edges of the pie crust for ventilation and one in the center.
9. In a small bowl, beat egg. Brush beaten egg over top of crust. Sprinkle with sugar and cinnamon.
10. Bake at 425 for 1 hour, until crust is golden brown.


Try it! It's awesome. And if you don't have quince just substitute two small apples in - it'd still be a kick-ass pie.